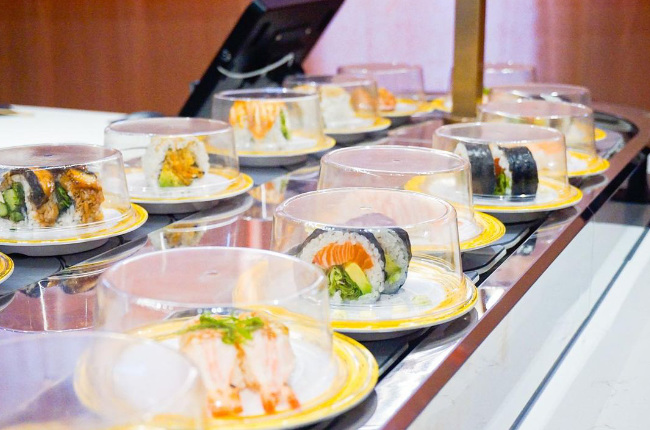 If you’re a fan of sushi or of Japanese cuisine in general, then chances are that you have heard about a sushi train restaurant before. Also known as ‘conveyor belt sushi’, sushi trains are an iconic Japanese experience that everyone has to try at least once in their lives. However, you don’t need to travel to Japan as we’ve created a list of where to find Melbourne’s best sushi train restaurants.

But if you’ve never been to a sushi train restaurant before, then here is some information to cover the basics:

How Does A Sushi Train Restaurant Work?

A sushi train restaurant consists of a conveyor belt that stretches throughout the restaurant and passes each table. Plates full of various kinds of delicious sushi and other Japanese delicacies circle the restaurant, with customers simply reaching over and grabbing the plate they desire when it comes around to them.

What Is The Etiquette For Sushi?

Unless you are in a traditional sushi restaurant in Japan, no one is going to judge you according to how you eat your sushi. However, if you’re wanting to eat sushi with the correct etiquette, here’s what you need to know:

How Do You Pay At A Sushi Train Restaurant?

Each plate has a set colour, shape and pattern, corresponding to how much it will cost. The restaurant will have a list nearby that will explain how much each plate will be. At the end of your meal, the staff will count how many plates you have stacked and will calculate the bill for you.

Now, let’s jump straight into where to find the best sushi train restaurants in Melbourne: 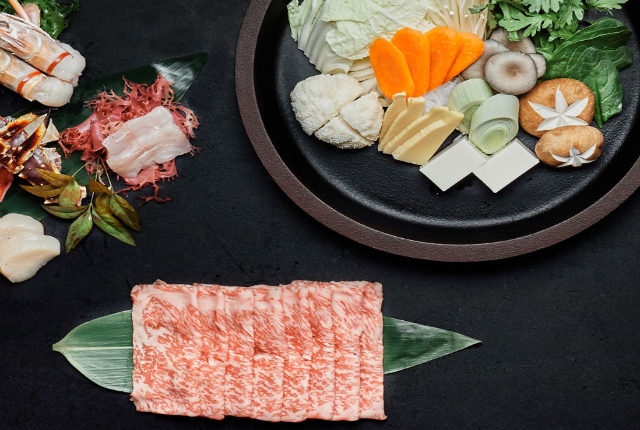 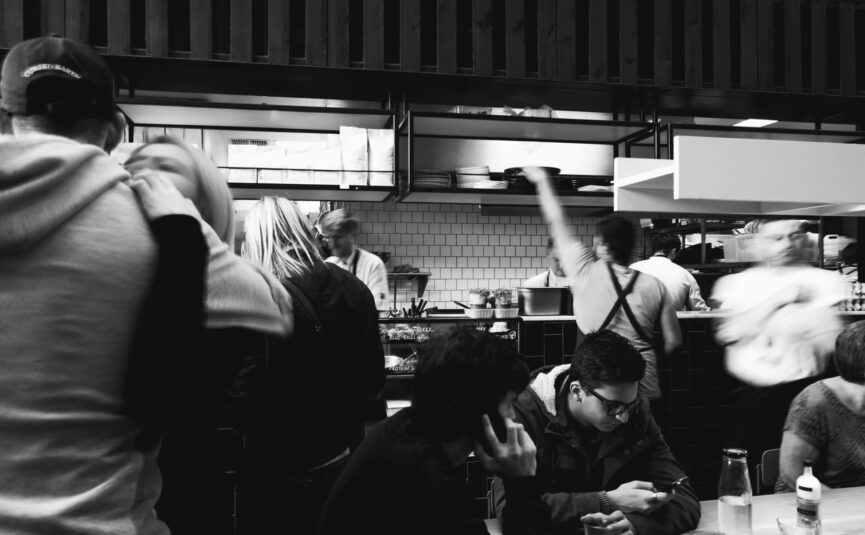 The Top 7 Melbourne Restaurants for a Business Lunch
Feb 5th, 2021 With nine locations across Melbourne, Sushi Jiro could easily be considered the mecca of sushi train restaurants in Melbourne. No matter which location you choose to dine at, you will always be greeted by friendly and attentive staff in a warm and vibrant atmosphere.

What sets Sushi Jiro apart from other sushi trains is that their menu caters to a wide range of customers, offering vegan, gourmet, healthy, premium and chef’s special options. Featuring a menu that has been carefully crafted by their experienced master Japanese chefs, you can enjoy traditional sushi such as gunkan, uramaki, nigiri, maki, temaki and sashimi.

A signature dish we highly recommend is their nori taco, exclusive to Sushi Jiro. It features a deep-fried taco shell made from seaweed and is filled with sushi rice and ingredients such as roe, avocado slices, lettuce and fresh salmon sashimi. You can dine at their sushi train section or choose from their takeaway options too. If you can’t see what you’re looking for, you can also use the provided iPad to choose items that are made to order as well! Located on Level 4 inside the Emporium, Tetsujin features a bar area, Japanese BBQ and one of the best sushi train experiences in Melbourne. The interior décor is inspired by Japanese train stations, with white subway tiles lining the walls and bright neon rings hanging down from rails that are attached to the ceiling.

In the centre of Tetsujin is where their trained chefs prepare a range of mouthwatering sushi and ensure each plate contains fresh sushi and isn’t doing too many trips around the conveyor belt. Their menu offers a wide selection to choose from including sashimi, vegetarian, meat and seafood options.

Apart from sushi, you can also choose from their Japanese BBQ menu such as wagyu scotch steak slices, succulent pork belly, angus rump strips, seafood salads and many more. The cocktails at Tetsujin are also out of this world, with their Final Fantasy, Sakura and Kanagawa Tsunami cocktails being an absolute must-try! 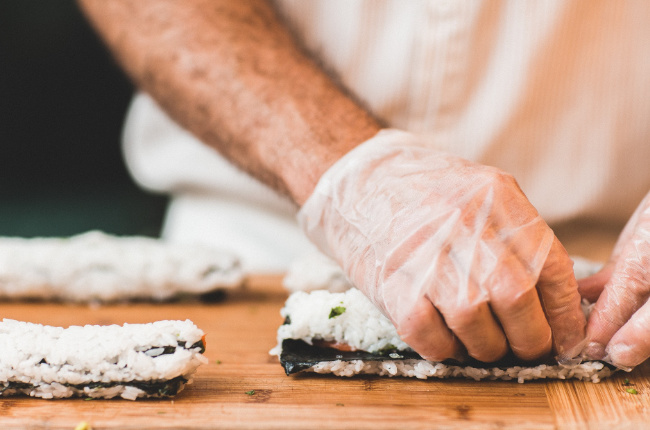 Located on Chapel St is Ganbare Kaz Kaiten Sushi, a popular sushi spot that has even been featured on Masterchef Australia. Their trained and skilled staff stop at nothing to ensure that each guest is greeted with a warm reception, enjoys their time dining and leaves happy with a full stomach.

Ganbare Kaz Kaiten Sushi features a rustic, brick interior, with an eclectic mixture of Japanese paintings and cooking utensils adorning the inside walls. The sushi train runs along the main section of the restaurant where customers can simply grab a seat and wait for their favourite plate of sushi to come to them.

Their menu offers lots of sushi options to choose from such as gunkan, nigiri and aburi, including fillings like crab, prawn, crunchy karaage chicken and fresh salmon. They also have noodle and salad options available as well, but just remember to arrive on an empty stomach! The character and charm of Sakura Kaiten Sushi II can be seen and felt from the moment you walk through their doors, from the giant artwork that takes up their entire back wall to the large showcase of Dragon Ball Z paraphernalia. Their sashimi menu features grilled and fresh salmon, tuna, yellowtail, snapper and scallops, with some unique items including their yellowtail with jalapeno sashimi.

Their agedashi tofu, takoyaki and grilled eel nigiri are just a few of their crowd favourites. Also offering options for takeaway pick up, you can enjoy unique items including their jellyfish salad, fried oysters, crab croquette, scampi sashimi and grilled snapper with basil sauce. Situated inside the MidCity Arcade, Sushi Hotaru is not only one of Melbourne’s best sushi trains but is also one of the most affordable. And once you have stepped inside, sat down and tried a few items on their impressive menu, it’s easy to see why they have earned a place on our list.

Their menu also offers an extensive range of sashimi, noodles and dessert, so there is something for everyone. Even though this sushi train restaurant may be smaller when compared to other sushi trains on our list, Sushi Hotaru is still definitely worth a visit when you’re in the CBD.

Makoto Sushi Train is another destination in the Melbourne CBD that you absolutely can’t miss out on. Conveniently located on Level 2 in Melbourne Central, their interior features bright, vibrant lighting, comfortable seats and a spacious, minimalist décor.

Their menu offers a great selection of delicious foods such as succulent otoro slices, ebi cheese aburi, bara chirashi with cubes of marinated sashimi, hamachi sushi and tuna kuro tobiko with black caviar, which go perfectly with their sides like yuzu kosho daikon and gyoza. Featuring an incredibly eye-catching interior design and architecture, Chocolate Buddha could be considered Melbourne’s most visually intriguing sushi train restaurant. Stunning architecture aside, they also make a very strong case for the best sushi train in Melbourne as well!

Featuring a sleek sushi train area as the centrepiece, Chocolate Buddha offers their patrons an incredible menu that is brimming with a huge selection of sushi and Japanese cuisine. Their sushi menu offers an assortment of ocean trout nigiri, prawn tobiko maki, wagyu yakiniku, tempura salmon and more.

If you’re in the mood for something other than sushi, then their menu also has ramen dishes, izakaya, homemade dumplings, udon, don and bento boxes. Chocolate Buddha also has side tables and outside seating which offer great views of the surrounding Federation Square.

If you are in the mood for Japanese food but not necessarily sushi, then check out where to find Melbourne’s best Japanese restaurants instead.

Marketing Manager |
I was born in France and lived there until my mid 20s when I moved to Melbourne, which I’ve been calling home since 2011. I’ve also lived in London, China, South Korea and I have an absolute bug for travel and food.
Read more articles

The Top 7 Melbourne Restaurants for a Business Lunch